In October 1947, Edgar Henson sustained serious leg injuries when his trousers caught fire during an early morning butchering. Neighbors rushed to help him, preventing certain death.  The following morning several of those neighbors engaged in conversation in the home of Jacob Warrenfeltz.  The conversation centered on the necessity to organize and fund what ultimately became the Fairplay Volunteer Fire Company, Inc. The Company was established and incorporated in 1947 by Adrian Diebert, Sr., John Hammond, Roy May, Jeremiah Mongon and Jacob Warrenfeltz.  These men, their wives and area residents banded together in building the Company that has endured for 73 years.

For the first six years, the Company held meetings and fundraising events in the Church of God on Spielman Road.  The building still stands in Fairplay, with remnants of the original Company name still visible on the front of the building.   Fundraising events such as community dinners, card parties, and dances involved work, yet people joined together to ‘do whatever they could to help’, a phrase that still resonates with members.

In 1949 the first fire engine rolled into Fairplay!  The Dodge still sits in the fire station, waiting for donations of time and money for refurbishment to her glory days.

Through the late 1950’s Elta Warrenfeltz served as the dispatch operator for Fairplay, Tilghmanton, Bakersville, Downsville, and areas from Lappans to Keedeysville Roads.  The fire house phone was located in a metal box, on a telephone pole, at the corner of her yard.  When the bell rang, she answered, 24/7 and used a switch (contrived by her husband Jake) to sound the alarm siren on top of the fire station – a siren that is still in use today!  Men came from a radius of 3-5 miles in such numbers they all couldn’t fit on back of that Dodge fire engine, so they followed in their cars and trucks to render aid and ‘do whatever they could to help’. 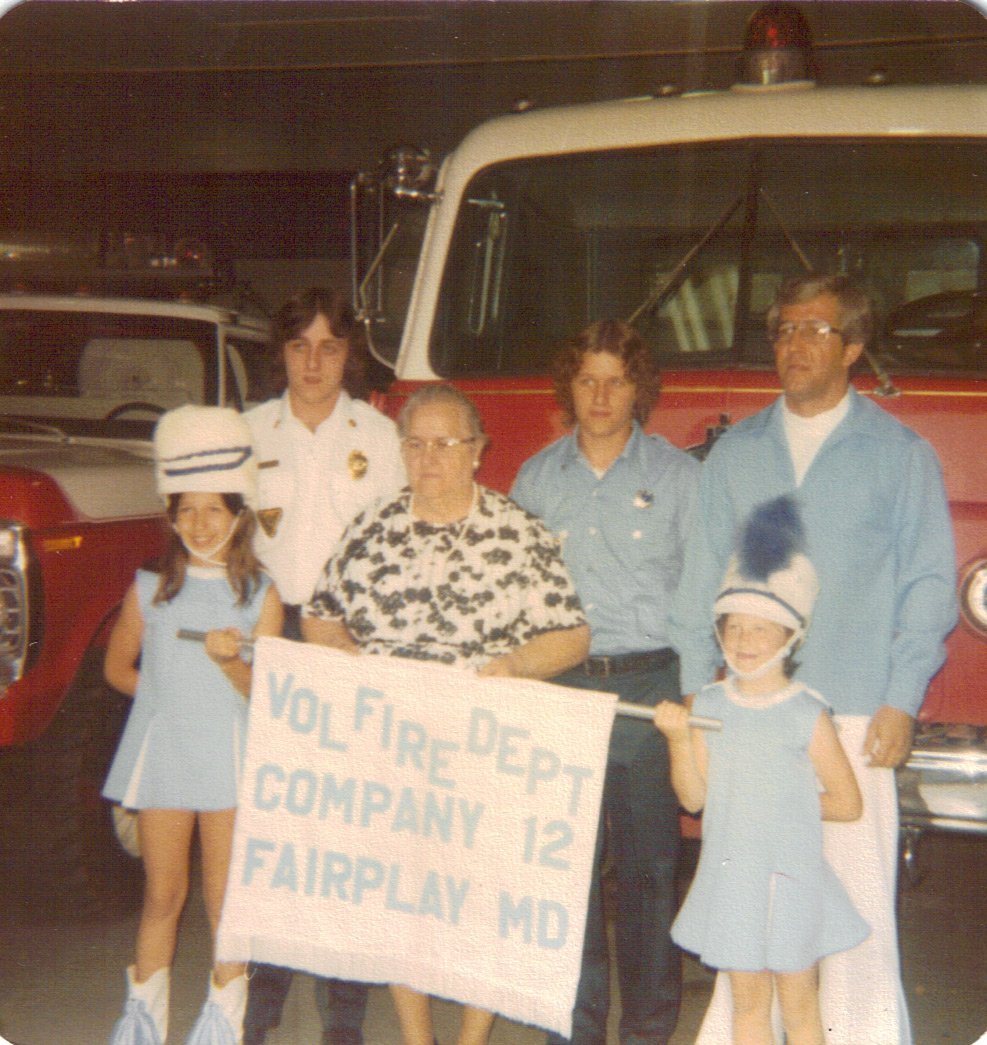 In 1953 Edwin and Ethel Eakle donated property for a new station and adjoining land designated for a carnival or park.  Their niece, Katherine (Eakle) Hartle is still an active member of the Company and her husband Richard has been instrumental in restoring the original siren. The young men who joined the Company in the early days went for training at the University of Maryland in Baltimore.  Without money for a hotel room, they slept in horse stables on the University campus.  Several recounted fond memories of those days as a great adventure in the big city! Meals were prepared and donated to them by the women auxiliary members of Baltimore area fire stations.

From that first Dodge fire engine No. 12, the Company grew to boast multiple emergency response units. An expansion of the existing fire station was completed in 1995 providing four apparatus bays, a banquet room and full-size commercial kitchen.  The 1953 section of the building still houses that 1949 Dodge and the prior banquet room and kitchen will soon be renovated into bunk facilities for fire fighters.

From 2008 to 2010 Fairplay’s response rate for its first due area began to fail for the first time in its 65-year history.  As the failed response rate stood at 26%, the Washington County Board of County Commissioners established a Task Force to determine the reason and seek solutions. As the Company 12 Officers refused all of the Task Force recommendations, the Commissioners ultimately suspended operations and assigned emergency response responsibility for District 12 to Sharpsburg, Williamsport, Boonsboro and Funkstown Volunteer Fire Companies.

Not satisfied to see the fire company out of service, community residents (including children of the founding members of the Company) met to discuss options.  One suggestion was to pursue a legal remedy, knowing it would be a long, difficult and expensive path to take.

A non-profit organization, CITIZENS for the Restoration of Fire Suppression and EMS in District 12 Area, Inc., was created.  From the first meeting in 2013 until the incorporated status was disbanded in 2017, CITIZENS’ members worked tirelessly to secure and fund well-qualified legal representation to tackle this unprecedented case.

Four petitioners were named and a three-year litigation ensued to address the issue of members being dismissed without cause which was in violation of Company Bylaws.  In addition, the actions taken by Company Officers were found to be oppressive and outside acceptable limits.

In February 2014 the court ruled in favor of the petitioners.  A Receiver was appointed to oversee all aspects of Company 12. Court orders included reinstatement of members, along with appointment of qualified members to correct the bylaw issue.  94 new members were sworn in within the first 30 days, 24 of those were certified fire fighters.  The Company was recertified and placed in operation at 10am on October 29, 2016.

Prior executive board members walked away, leaving legal fees of $225,000 unpaid. The new members found themselves responsible for that debt as well as needs for necessary repairs to damaged fire apparatus and neglected buildings. An extraordinary effort by hundreds of residents eager to donate time, talent, and funds resulted in multiple improvements to the apparatus, equipment, buildings and grounds.  First responders eagerly answered calls, proud to be ‘back in service’. We again heard the phrase: “I just want to do whatever I can to help.” By the end of the first year of operation Company 12 boasted a ZERO FAILED RESPONSE RATE.  In fact, we had the highest response rate in the County!

In June 2018 the once ‘great Fairplay Carnival’ made its return to the community for the first time in over a decade.  Hundreds of people enjoyed the famous fried country ham sandwiches, steamers and fresh cut fries along with entertainment and rides.

Members continue working to build the company with well-trained, professional first responders.  2021 will mark the year a new tanker will be put in service.

We welcome everyone to be part of our Company and share in our community pride!

When this happens, it's usually because the owner only shared it with a small group of people, changed who can see it or it's been deleted.
View on Facebook
·Share

The Chief Officers of Company 12 presented 4 of our members with new helmets for their successful completion of their MFRI Firefighter I class, as they were able to turn over their old helmets that signified NC status. Bradley Moschel, Porter Boss, Joey Ralls and Emily Kopp are all part of the Washington County Technical High School Fire & Reacue Academy.

Congratulations to each of you for reaching this milestone and good luck with the remainder of the school year! ... See MoreSee Less

Congratulations to all And to Joey I amso proud of you .KEEP UP THE GOOD TO ALL . Jenny

Awesome job men, congratulations. To the Chief officers. Great job. I know that met so much to them young men.

Thank You All For This Path You Are Taking !!! 🫡

Congratulations. Very proud of you all. Keep up the hard work and dedication. Love you Brad

Congratulations! You all make us proud and are a huge asset to Company 12👏👏👏

Congratulations. We are all proud of you.

Congratulations to all 4 of you. Your all assets to our company

Congratulations to you all. We need more young ones to carry the load!!

Congratulations to all keep up the great work

Congratulations to all four.

We would like to Congratulate 4 of our members, Bradley Moschel, Emily Kopp, Porter Boss and Joey Ralls on their successful completion of their MFRI Firefighter I practical and written exams. The Fire & Rescue Academy through the Washington County Technical High School gives our young members an amazing opportunity to jump start their training, while earning college credits through the University of Maryland and providing their respective companies with certified firefighters to help handle calls for service.

Congratulations and kudo’s on your hard work and dedication! ... See MoreSee Less

Congrats on seeing all your hard work pay off!

Thank you to the Westfields Family that dropped off an amazing box full of bagels and cream cheese in appreciation for the work done by firefighters on a recent fire call. Our members are very appreciative of your kind words and the special Panera Breads delivery!!! ... See MoreSee Less

I have tickets if you want one ... See MoreSee Less

When this happens, it's usually because the owner only shared it with a small group of people, changed who can see it or it's been deleted.
View on Facebook
·Share